Another study has been released linking weight to breast cancer survival. Only this time, 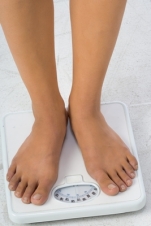 the research indicates that being underweight may be as risky as being overweight.

The findings support the common recommendation to maintain a healthy weight throughout life, said Marilyn Kwan, a research scientist in the Kaiser Permanente Northern California Division of Research. She noted, however, that the long-term impact of weight on survival after breast cancer might not be the same in all patients.

Although this study  found an association between weight and risk, it’s important to note that this does not prove a cause-and-effect link. The results are considered preliminary because they have not yet been published.