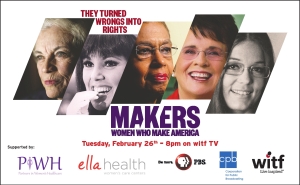 Over the past 50 years, women have gained a voice and visibility that has transformed this country. Their story is told in a documentary airing Tuesday, February 26th on witf. Makers: Women Who  Make America tells the story through women who have made a difference.

“By spotlighting some of the most remarkable women in our nation’s modern history, Makers: Women Who Make America will tell the comprehensive story of how women have advanced in our country during the last half century,” said Paula A. Kerger, President and CEO of PBS. “We know the documentary will educate and enlighten, but we hope it will also inspire viewers to make positive changes in their own communities.”

There will be interviews with many powerful women including Hillary Rodham Clinton, Condoleeza Rice, Diane Von Furstenberg, Gloria Steinem and Christiane Amanpour. In leading up to the show, witf is featuring stories of inspiring women from Central Pennsylvania.

ella health is a sponsor of this important project. We believe that it’s important to recognize the power that women have to take control of their own lives and to make a difference in their community. We want to support you in accomplishing your goals.