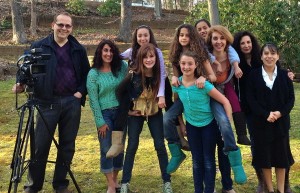 encourage women to get mammograms, she knew it had potential. After all, she was two years overdue for an exam.

The girls, from Middletown, NJ, have all been touched by cancer or serious health issues in their families. As they talked about it during a troop meeting, they wondered why women would put off getting an exam that could tell them if they had the disease so that it could be treated. Dorianne explained about busy schedules and how easy it is to forget. The girls decided that if women wouldn’t it for themselves, maybe they would do it if their daughters asked them to. They launched a campaign to find out and have been getting a lot of attention for it.

The campaign, dubbed “Do it for your Daughter”  is part of a community service project to earn a Bronze Award, the highest Girl Scout honor available for their age group. They started with a public service announcement that appeared on WABC. That announcement led to appearances on News 12, Good Day NY and an invitation for a special guest appearance at the Paint the Town Pink event, “Little Things” with Bill and Guilianna Rancic on May 4th at the Algonquin Theater in Manasquan.

The girls are now launching a drive to get 1,000 moms to “pinky promise” to get a mammogram.

“It’s their idea,” said Dorianne, who was motivated to get a mammogram. “Every girl has been affected by cancer and it’s very personal to them.”

The second part of their project is a dance party at Nut Swamp Elementary School in Middletown on May 10th called “Jam for the Exam.”