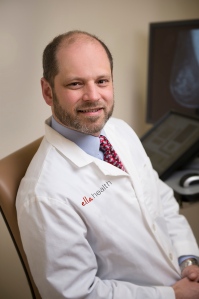 As a radiologist with ella health, Chad Coeyman, MD, spends most of his time looking at images rather than meeting with patients, but it’s the personal aspect of his job that he enjoys most.

Even though he doesn’t get to know patients, he knows that what he does has a big impact on their lives.

“I like the fact that you can make a real difference,” Dr. Coeyman said. “Breast cancer is such a treatable disease when it’s caught early enough.”

Dr. Coeyman started in radiology as a generalist but he saw a need in women’s health. His interest in the field has grown as the technology has improved. He is particularly enthusiastic about the 3D imaging system used at ella health.

This system takes images from multiple angles and compiles them to form a more comprehensive picture of the breast. Studies have shown that the technology allows doctors to find more cancers and rule out areas of concern so that patients aren’t called back unnecessarily for more testing. But Dr. Coeyman doesn’t need the studies to be convinced – he has seen first-hand the difference it makes.

There have been times when he has seen something on a conventional image that looks suspicious. Before 3D, he would have recommended that the patient return for more imaging. But when he looked at the 3D images, he could see that they were clearly not breast cancer. Sometimes, it’s an area where breast tissue has overlapped. Other times, it’s a calcification that is not worrisome.

“I’m glad when we don’t have to ask a patient to return,” Dr. Coeyman said. “That can be such a stressful experience. It’s better to be able to avoid it.”