Overcoming High Anxiety for a Mammogram 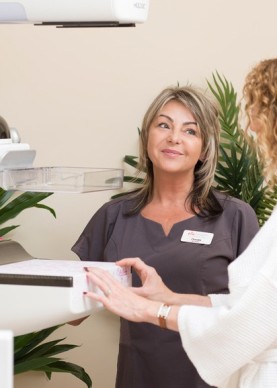 Chicago native Cynthia has high anxiety disorder, which makes even routine medical appointments extremely difficult. This year, however, her mammogram turned out to be much different than what she expected.

She said she could feel her anxiety rising whenever she even thought about making the mammogram appointment. It happened every year, but this time, it seemed worse than ever before.  One day turned into a week, which turned into months.

Finally, she made herself make the call before months became years.

“This is my health, and I know it’s important,” she said. “You have to know what’s going on. I know early detection really matters.”

When the day of her mammogram arrived, Cynthia could feel her heart racing when she thought about it. She tried to reassure herself, but she still felt the tension. By the time she walked through the door of Ella Health’s Chicago center, the anxiety had completely taken hold and she felt shaky. But then, she was given an exceptionally friendly greeting.

“They really seemed to understand. They took me seriously and were really patient,” Cynthia said. “I told them how I was feeling, and they knew just what to do.”

They made jokes and got her talking about other things to get her mind off the appointment. She started to relax a little. While she waited, she focused on the beautiful décor, the aromatherapy and the soft music. It all helped her feel more comfortable.

During the appointment, the mammo tech took her time. She explained what was going to happen next and she made sure Suzanne was ready for each step. And then, the appointment was over. It took less than thirty minutes.

“It helped that it went so quickly,” Cynthia said. “It was all over before the anxiety could build as it often does.”
Cynthia said she still feels anxiety when she thinks about going to the doctor, but now she said she’ll feel better about getting a mammogram.

“I know that there is this place where people understand what I go through and they know how to help me stay calmer,” she said. “That really means a lot to me.”

Cynthia shared what she does to help manage her anxiety: